I've been obsessed with poker for about five months now. I've just this week completed my goal of turning an initial £10 stake into £100! There were two things that originally got me interested in it.

Firstly, unlike many other gambling games, it involves a degree of skill. I thought that if I learned the maths and probability behind it, maybe I could do well.

Secondly, playing it in a casino doesn't involve playing against the house. And as we all know, the house always wins. For example Blackjack and Roulette incorporate rules specifically designed to give the casino an edge of the players, and slot machines have a fixed percentage that they return over time.

I didn't really understand how it all worked, so I've done some reading and here's what I've learned. It turns out I was wrong!

The house edge in Blackjack comes mostly from the rule that if the player busts then they lose - it doesn't matter if the dealers subsequently busts too. This happens often enough to make a bit of money for the casino every time it does.

This means that even a good Blackjack player will lose on average 1% of the their stake over time, but 1% is pretty good compared to some other casino games. 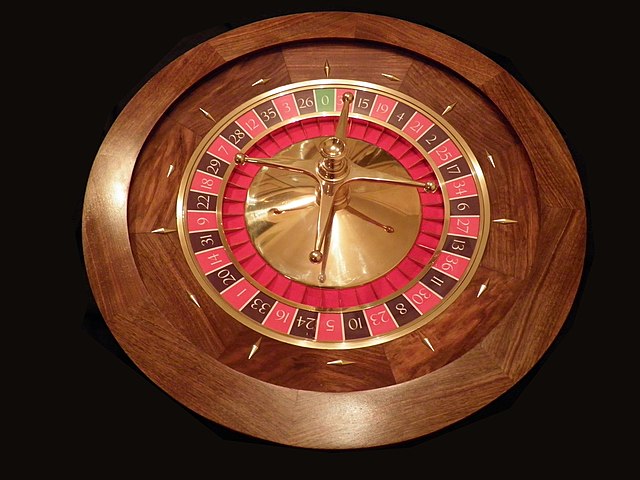 In the case of Roulette the house edge comes from the green 0 pocket on the wheel.

Using European Roulette as an example, there are 37 pockets that the ball can fall into. If you put £1 bets on all 37 numbers you'd be guaranteed to win £35 every time the ball rolled, losing you £2 per go. The house edge here is 2.7%.

American Roulette has a 0 and a 00 pocket, which increases their edge to 5.3%.

To be honest I don't know why anyone ever plays Roulette, but many people over the years have told me about a mathematically proven system that beats the house.

The idea is simple - you place a bet on red (or black if you prefer) and each time you lose, you double your stake. This is formally named the Martingale System.

Eventually I'm bound to win, because red has to come up at least once!

Say we started off with a £1,000 bet on red, eventually we're going to win back £1,000 when red comes up, even if it takes ten spins. But if it takes ten spins, then by spin ten we're betting £512,000 just to win £1,000! If you've got half a million quid lying around, are you really going to risk all of it to win a grand? And what happens if it takes twenty spins? Pretty unlikely, but you'll need just over £1bn in case it happens.

The second reason this doesn't work is because of the 0. One time in 37 (on average) the little ball is going to fall into the zero pocket and you've got to start all over again. It's pretty unlikely to happen once (2.7% likely in fact), but in our ten-spin example it's not looking good for you. This, I discovered, is where the really big money comes from. Slot machines are programmed to return a fixed percentage back to gamblers over time.

This is typically around 80-90%, but that's over millions of spins, and you're not guaranteed to get anything like that back.

In this example photo that I snapped in a pub the other day, it's 74%. Those are pretty terrible odds.

Taking Nevada in 2009 as an example, poker brings in around 1.6% of the total gaming revenue for the state.

So let's avoid those too.

So I started playing poker online, thinking that I was being clever by not having the compete against the house. But pretty quickly I started to wonder how websites like Pokerstars was making money out of all this. And that's when I discovered rake.

Rake is the commission taken by a poker room (real or online) from a game. It ranges from 2.5% to 5% depending on where you play, and is usually expressed in a tournament buy-in as £X + Y where X goes into the prize fund and Y is the rake that the poker room take for organising the tournament.

To give you an idea of how much money they're making out of this, they recently celebrated their 100 billionth hand, and most of their tournaments cost more than $0.50 to enter. Last year Pokerstars was sold for $4.9 billion in cash.

It turns out that rake is the major factor stopping the average player from winning money at poker. One poker forum post said "rake isn't the most important thing, it's the only thing".

Although it looks like they're giving you free drinks and food, in a live casino you're actually paying something like $15 an hour to play.

Of course you are, and I can't believe I ever thought differently.

Learning this has really changed my opinion of poker - I'd much rather play a home game with some friends, because I know that no-one's taking my money apart from my mates! In the three weeks since release, Pokémon Go has acquired more users than Twitter, and it's made owner Nintendo's stock price jump through the roof...