One of my favourite questions is 'how did it come to be like this?'. My recent obsession with playing poker has led me to wonder why the standard 52-card deck looks the way it does, specifically the face cards. Here's what I've discovered.

Being British I've got a tendency to think that everything was invented here, but playing cards originated in China. As early as the 9th century there are references to a "leaf game", which is about the same time that China invented printing on sheets of paper instead of rolls. Sadly the rules for this game were lost by 1067. Card game enthusiast and sinologist William Henry Wilkinson suggested that the first playing cards may have been paper currency, being the game and the stakes combined. By the 15 century there were four suits to a pack of 38 cards.

These cards made their way to Mamluk in Egypt by the 11th century. The Mamluk deck was 52 cards in four suits (polo sticks, coins, swords, and cups) of 13 cards with three male face cards: king, viceroy and under-deputy. Possibly because of Sunni Islam aniconism, the cards used the words of the titles but didn't include their pictures.

Here is an example of the Mamluk deck, remember these are the front of the cards not the back!

From Egypt, playing cards made their way to southern Europe by the 14th century, and traditional Latin decks still use the same four suits. These were originally made by hand, with the earliest playing card print woodcut dated to 1418. Once print became widespread in Europe there was an increase in variety of different card types created by different manufacturers.

The earliest card game to which the rules are still known is Karnöffel, from what is now Germany in early 15th century, using 48 cards but can be played with a standard 52-card pack with the aces removed. These are some example cards.

It is about this time that the Tarot deck came into existence, with the oldest examples from Italy. I didn't realise that the decks were related, but Tarot cards are based around five suits numbered 1-10 with King, Queen, Knight, and Jack/Knave cards.

As cards spread to Germany the suits changed to Leaves, Hearts, Bells, and Acorns, and included a Queen card for a while. As they spread into France the suits evolved to Clovers (clubs), Tiles (diamonds), Hearts, and Pikes (spades), the Queen was permanently included and the Knight was dropped.

It's the French set that evolved into the standard pack used in most card games today, but there are still different sets which are widely used in Spain, Italy, Germany, and Switzerland.

In France, a number of variants appeared, with the card manufacturers in Paris and Rouen dominating.

The Parisian pattern became predominant in France by 1780, and is known as the portrait officiel. It most commonly has 32 cards (the 2-6 cards are removed) with a 1 instead of an ace. The most interesting feature of this pack is that all the face cards are named: the King and Queen of Hearts are called Charles and Judith, which is nice. 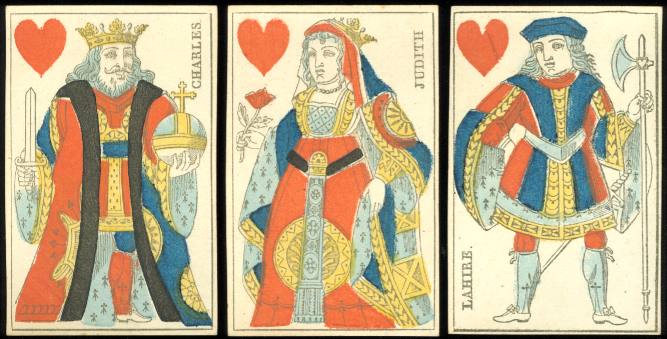 However it was the Rouennais pattern that was exported to Britain starting around 1480. English manufacturers started making their own, and a ban on the import of playing cards in 1628 isolated the designs from the rest of Europe.

James I passed a law requiring a company logo on the Ace of Spades to prove that cards were made in England and tax had been paid. Similar taxes were introduced in other countries, with the ace of clubs being the most elaborate in France, and the ace of diamonds in Russia.

The English cards were of a poor print quality, and so the Rouennais cards lost their detail to become the more familiar stylised representations until Charles Goodall and Son fixed the designs in their current form in the late 19th century.

Reversible cards were patented in the late 18th century. Before then card players had to flip their cards the right way up, which can give a clue to your hand, but it meant losing more detail on the face cards.

Indices (the numeric value) on the corners of the cards were introduced in 1874, and it was around this time that the Knave changed to a Jack in English language packs - early indices used Kn for knave but this was too similar to K for king. Similar problems occurred in Latin languages (the words for King and Queen both start R) and  Germanic languages (where they start K).

Rounded corners were introduced to help reduce wear on the edges of the cards, and designs were added to the back of the cards to help discourage writing on the backs and giving away information.

Jokers were introduced by the USA around 1860 as a third trump card to play the game Euchre, and were standardised into the English-language packs. 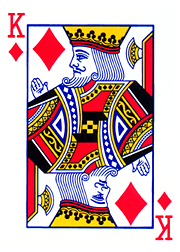 Finally, the face cards in a standard pack are facing specific directions and feature specific items. These are great for pub quiz questions:

The advent of online poker has seriously changed the appearance of cards for the first time in maybe 100 years. There's no longer a requirement for them to be reversible since the computer always deals them the right way up. The indices are generally larger, especially on mobile apps, to make it easier to identify your hand.

But old traditions die hard, and the King of Hearts from Zynga Poker is still a suicide king, although he doesn't have both hands showing.

The most important change is that the players don't need to use the same pack as each other. Sites like PokerStars, below, allow you to optionally use four-colour decks that make it easier to differentiate suits. You can buy these decks for real-life play, but some players find them distracting.

Shame this hand was only for play money:

Fancy a game of poker? When I started Lost in Thought I was in a pretty dark place...